Before we look at the charts I would like to go over some challenges that we’ll face as the current impulse move in the PM complex continues to push higher. It’s not every day that you will find yourself getting in close to the bottom of a multi-month rally.

One of the biggest problems I’ve witnessed over the years, especially with PM stock investors, is they grow complacent as the rally phase starts maturing. They believe they are invincible as their profits rise and everything is right with the world. That complacency usually means not getting out close to the end of the impulse move which is extremely hard to do even if you’re looking for a top. They will either sell in panic as the correction takes hold or hang on to their positions during the entire correction which is emotionally hard to do.

I know many here traded in the 2000 to 2011 bull market in the precious metals complex. During that great bull market how many actually made any serious money? By making serious money I mean actually taking it out of the market to pay off debt or take a major vacation or help someone in need or whatever to actually use it. What the markets give us during the impulse rally will usually take it back during the following consolidation phase as investors aren’t aware of what is taking place until it’s too late. It’s just the nature of trading the markets.

Now more than ever is the time to be on our toes looking for anything that could go wrong. That means we have to have discipline and focus to stay on top of our game and not get carried away by counting our profits before we actually take them. How rare is this current rally in the ARCA Gold Bugs Index, HUI, for instance?

There have only been 2 impulse moves since the 2008 crash low. The 2008 rally that ended the bull market in 2011 and the other impulse move that only lasted 8 months from the January 2016 low to the August 2016 high. For the precious metals investors that could’t bring themselves to trading the stock markets life in the PM complex has been hell and I don’t think I’m exaggerating. Again, after all these years we finally find ourselves at the start of a brand new impulse move that is very likely the start of the 2nd half of the secular bull market in the PM complex.

There is one more point I want to bring up. When I began to put our PM stocks portfolio together I said I was going to be unconventional and not buy the big cap PM stocks, not because I don’t like them but because this is a unique sector. Compared to most sectors in the stock markets, which are very huge, the PM stocks make up a small universe of stocks that you actually get to know personally, by tracking and trading them for many years, at least from 2000 to 2011.

If you didn’t trade the PM stocks in the 2000’s bull market then you are not aware of how differently the big cap and juniors would trade. What I learned back then, and why I structured our portfolio like I have, is because the juniors can catch fire and have large percentage gains vs the big caps. The large cap PM stocks are going to really do well during this impulse move and you’ll be happy in the end.

There is one last little point I want to mention. Many PM investors believe that the only real important money you make trading the PM complex is to only trade the big caps. For some reason, because you are invested in the big caps, that money is more important than the money you will trade the juniors with. If you understand this sector, nothing could be further from the truth. When all is said and done, at the end of the day your play money used to trade the juniors and the big caps will have the same value, but the junior portfolio could have a much bigger percentage gain. Please understand this is only my opinion and each investor will have to decide for themselves on how they want to play the PM complex.

Below I would like to show what some of the impulse moves looked like during the 2000 to 2011 bull market, up close and personal. These charts should give you an understanding for what may lie ahead. There is no way we can know every twist and turn an impulse move will make–only that it will be very powerful. We do know that there will generally be several small consolidation patterns that will form along the way that should be recognizable.

Below is the history chart for the HUI showing the consolidation patterns that were made during the 2000 to 2011 bull market. 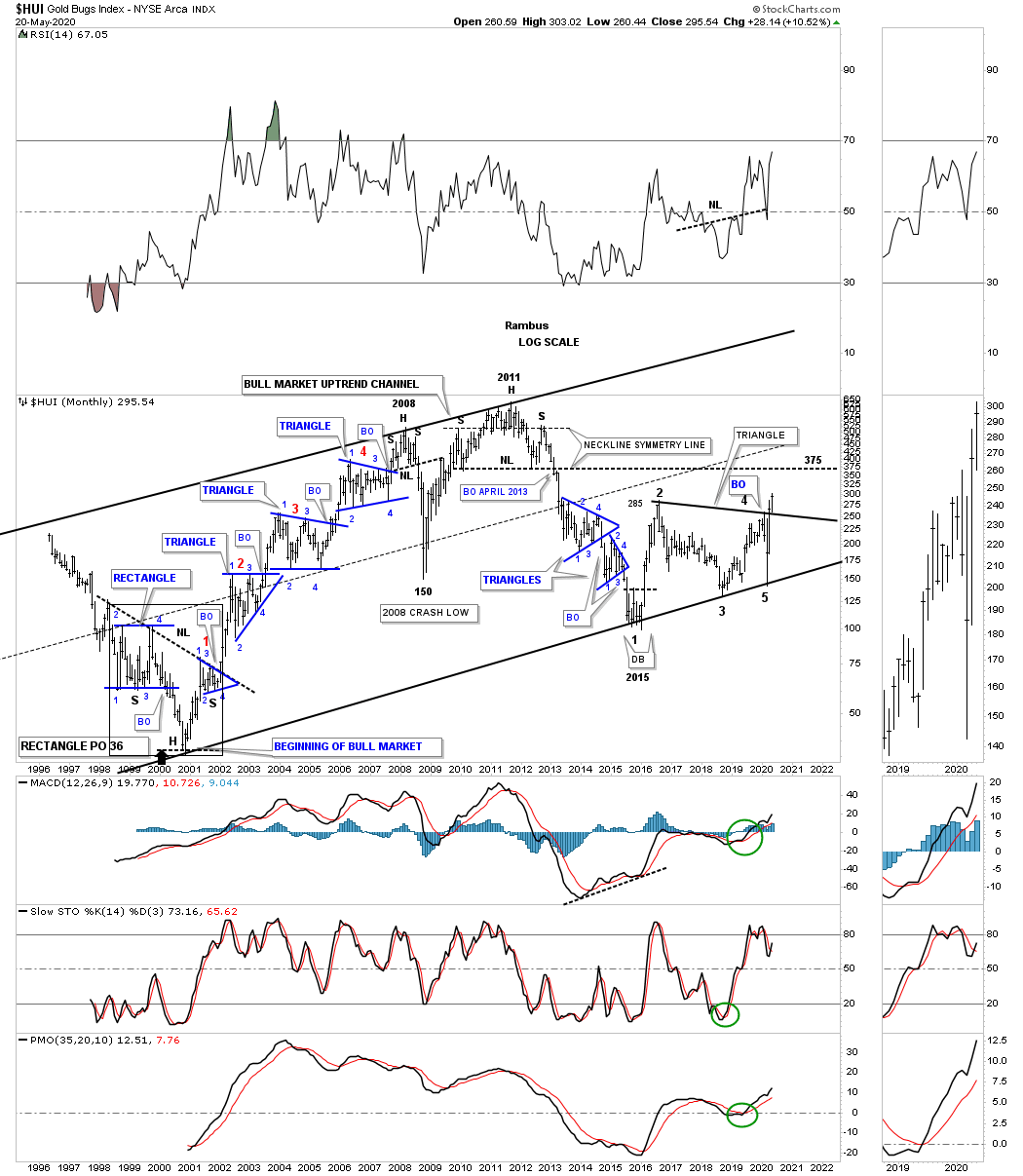 This first chart shows the very end of the bear market for precious metals such as gold and silver, and the beginning of the 2000’s bull market. Back in the old days, during the start of the bull market, there was a 6 month time cycle that was usually dead on the money. But over time it lost some of its luster.

Reversal point #4 on the blue triangle consolation pattern was the beginning of the second impulse move in the new bull market that formed 3 small red consolidation patterns before it came to an end. That 2nd impulse move lasted from November of 2001 to the top in June of 2002 which was just a little over 6 months. This chart shows you 2 separate impulse moves with the blue triangle as a halfway pattern between the 2 moves. All halfway patterns don’t measure out perfectly but they do give you an idea of where you may start looking for an end to the impulse move. 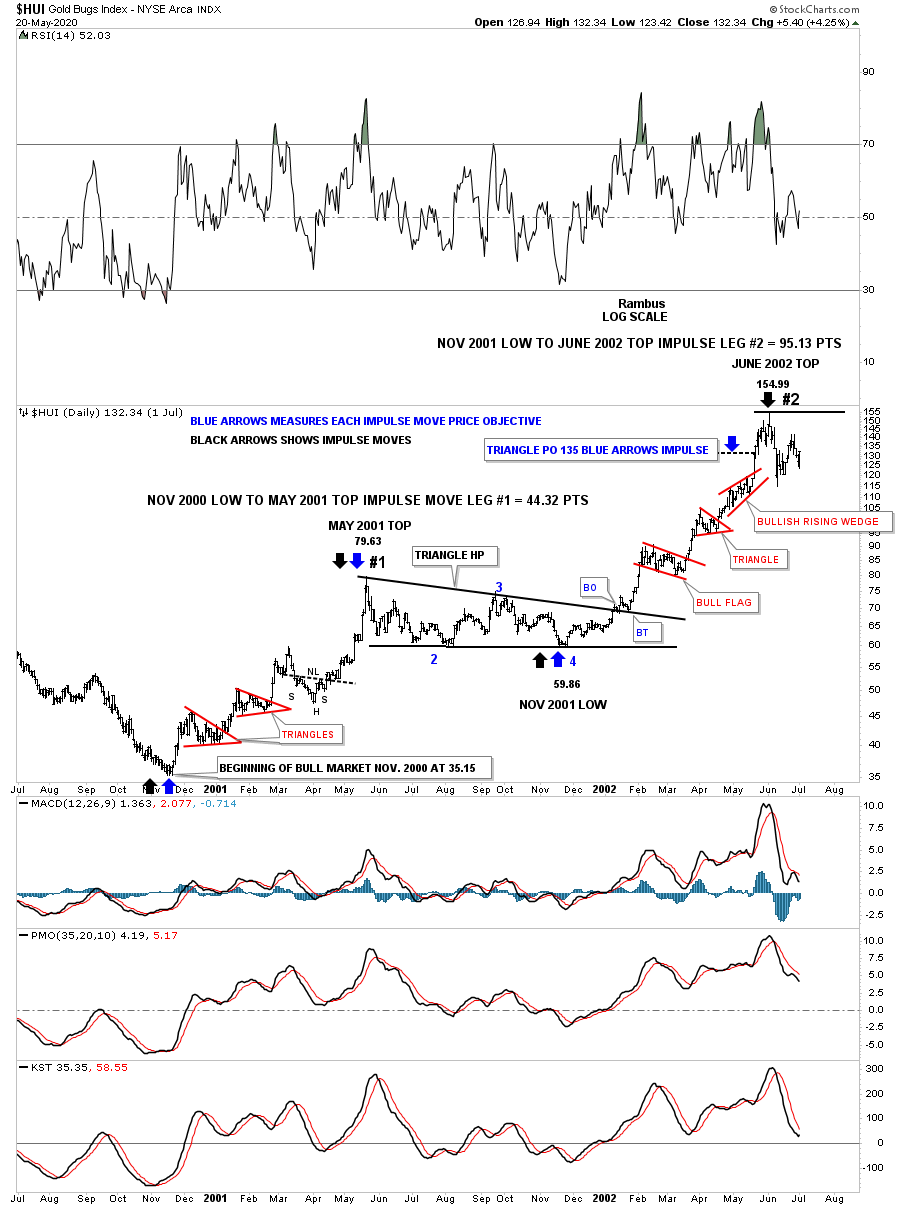 This impulse move formed 2 small consolidation patterns but not a good measuring pattern. There is another measuring technique I use sometimes, especially with rectangles and sometimes with triangles. You measure the width of the triangle between reversal points #1 and #2 and add that distance to the breakout point above the top rail to get your price objective and in this case it was dead on the money at 255. 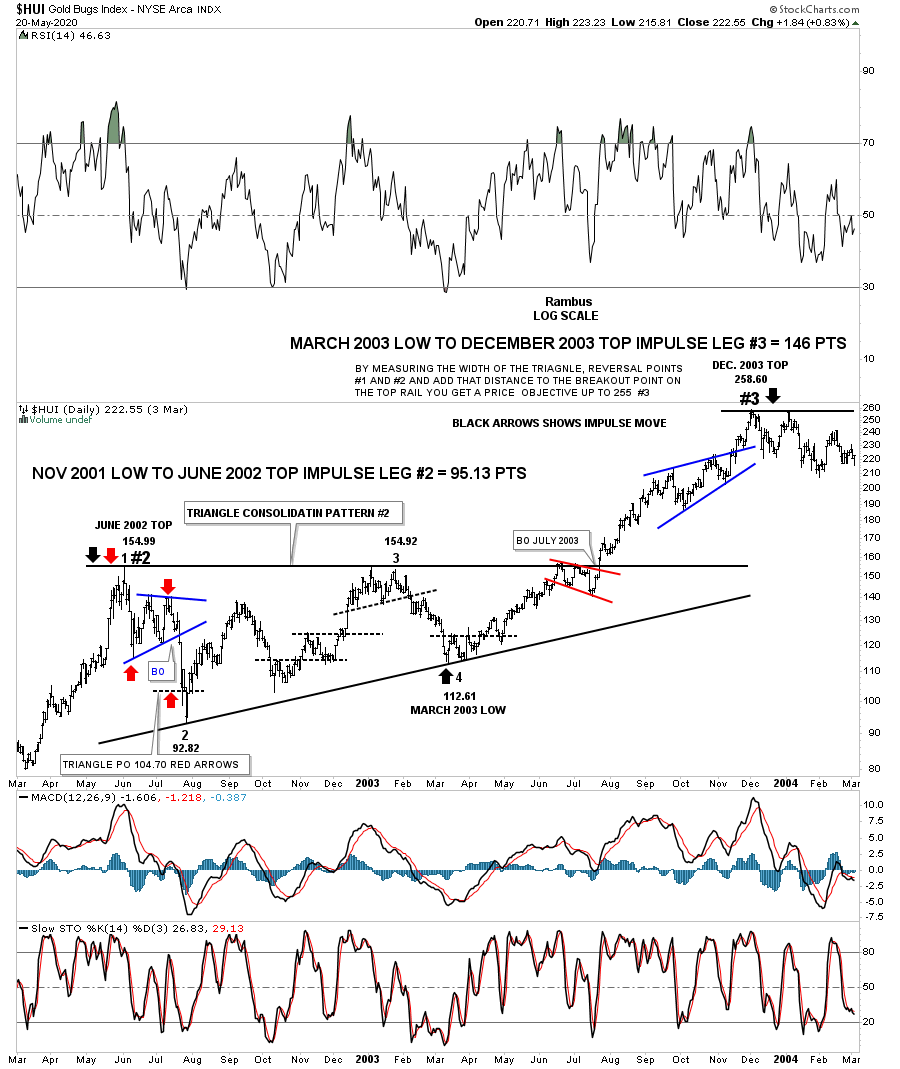 This next chart starts where the one above left off, at the 2003 top. The HUI built out another very symmetrical triangle to consolidate the previous impulse move. Again the impulse move began at the 4th reversal point.

This impulse move completed 2 red consolation patterns before it finished moving higher. What you may have noticed is that each consolidation pattern is getting a bit bigger and each impulse leg is getting longer. 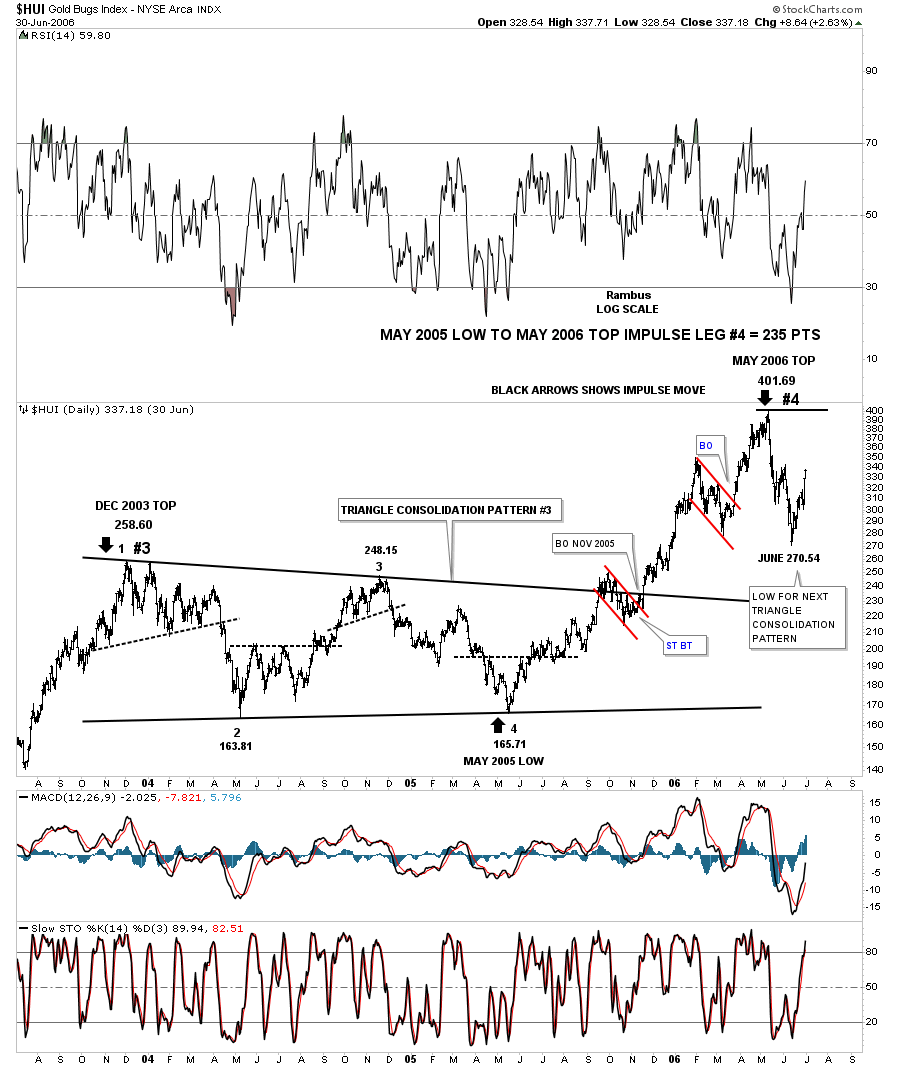 I can’t find the last impulse move in the 2000’s bull market but I do have the 2008 H&S top and the 2008 crash that followed the completion of that H&S reversal pattern.

When I mentioned complacency early in the post, this is a good example of what I meant. When this H&S top was building out I strongly suggested it could be a very symmetrical H&S top which could reverse the bull market that began in 2000. I was literally booed off the stage for making such a statement. No one wanted to see the party come to and end so no one was looking for any type of reversal pattern.

I alway say I didn’t know how strong the impulse move would be, only that the trend was reversing from up to down. I wasn’t expecting the crash scenario but that is what we got, when no one was expecting it.

Now is the time to be focused and not take our current impulse move for granted. These moves don’t come around every day.

This could be a life changing event for some of you if there are no serious mistakes made. We’ll take it one day at a time keeping an open mind to what the PM complex throws at us. 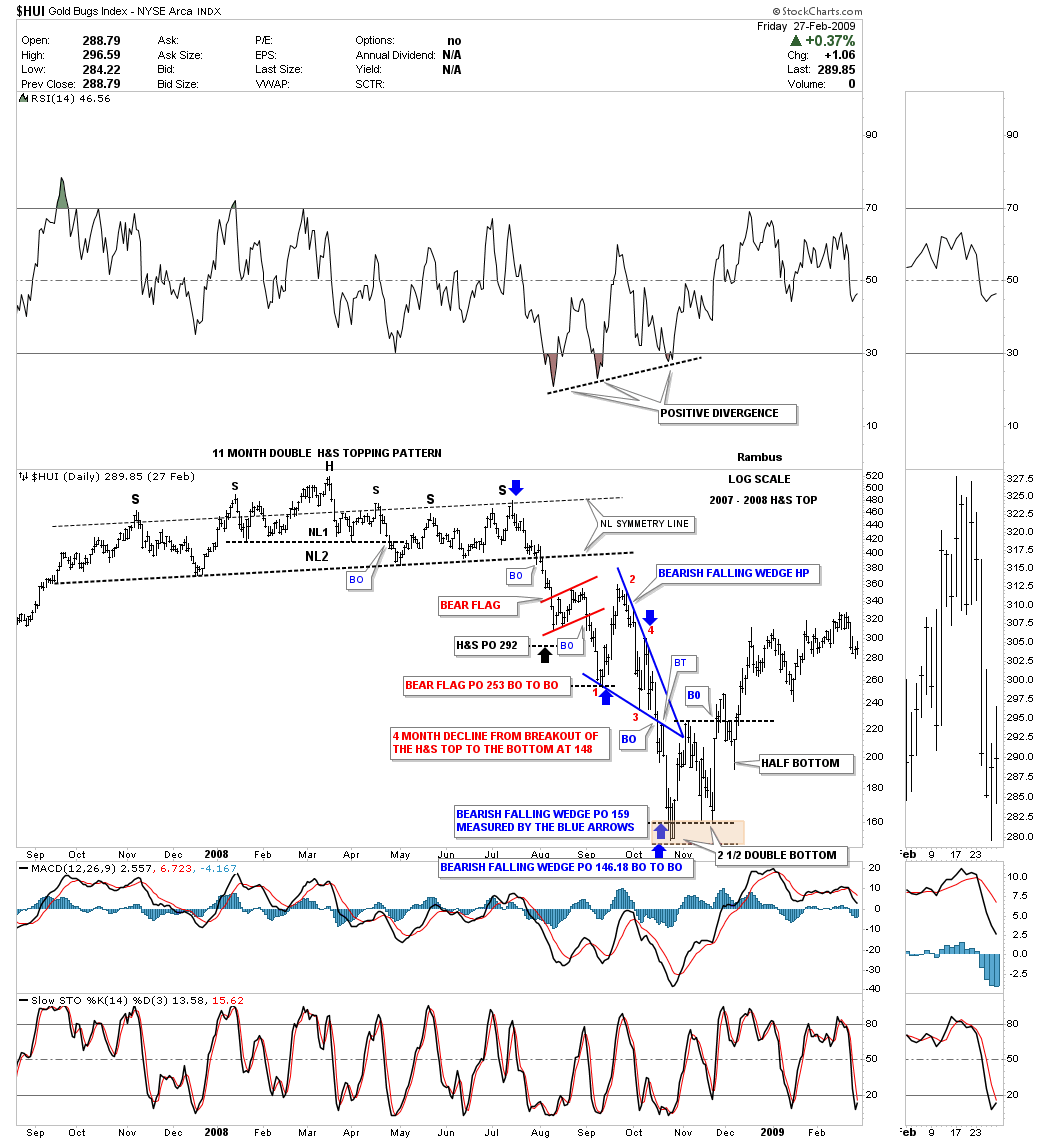 Masks Off Or Is That Risk-Off?