INFLATION remained stable in April, while core inflation eased to a five-month low, leading economists to expect the central bank to keep rates on hold at next week’s policy-setting meeting.

Preliminary data from the Philippine Statistics Authority released on Wednesday showed the consumer price index rose by 4.5% year on year last month, unchanged from March but faster than 2.2% in April 2020. This as price increases for food staples such as rice and vegetables slowed, helping offset a spike in transportation costs caused by higher oil prices.

April headline inflation was lower than the median 4.7% in an analyst poll by BusinessWorld late last week, and settled within the Bangko Sentral ng Pilipinas’ (BSP) 4.2-5% estimate. 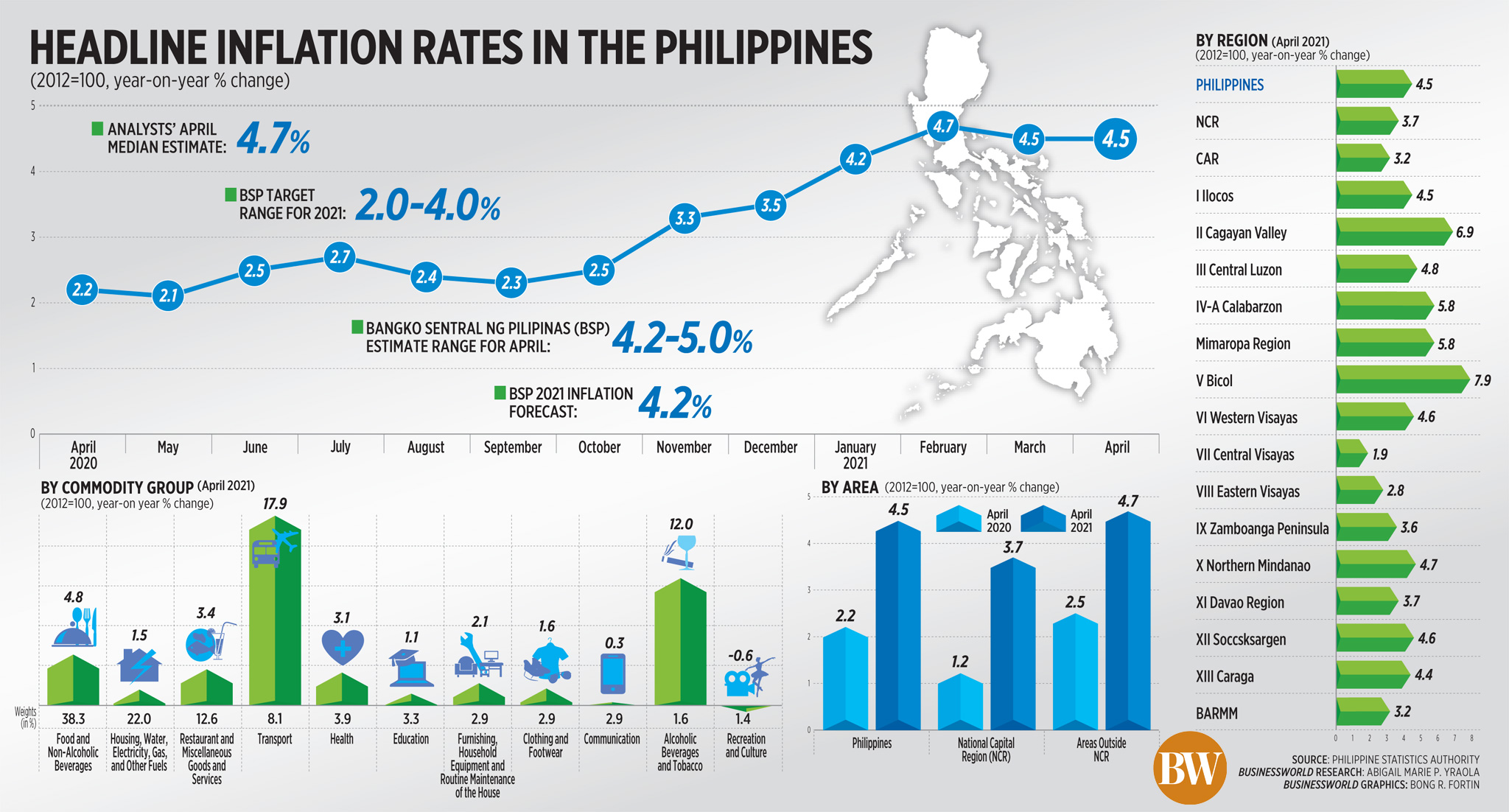 Year to date, inflation averaged at 4.5%, slightly above the BSP’s 2-4% target, as well as its inflation forecast of 4.2% for the year. April was the fourth month in a row that inflation went beyond this year’s target.

The following indices saw steady inflation compared with the previous month: clothing and footwear (1.6%); recreation and culture (-0.6%); and education (1.1%).

Core inflation, which is used to determine price trends by stripping out volatile prices of food and fuel, stood at 3.3% in April, easing from 3.5% in the previous month. Still, this was higher than the 2.9% core inflation in April 2020.

Meanwhile, inflation for the bottom 30% of income households stood at 4.9% in April, slower than 5.5% recorded in the previous month, but still faster than 2.9% in April 2020.

Inflation for the bottom 30% takes into account the spending patterns of this income segment, assigning heavier weights on necessities.

“The latest outturn is consistent with expectations that inflation would remain elevated this year, owing to supply-side pressures, before settling close to the midpoint of the target range in 2022,” BSP Governor Benjamin E. Diokno said in a Viber message to reporters.

PSA data showed prices of pure pork in Metro Manila averaging P360.20 per kilo in April from P328.71 per kilo in March and P322.90 in February. However, this was slightly lower than P367.7 per kilo in January.

“The ongoing pandemic continues to pose downside risks to the inflation outlook and growth prospects. However, improvements in external demand as well as continued rollout of the government’s COVID-19 (coronavirus disease 2019) vaccination program and other stimulus measures will bolster economic recovery,” he said.

Benchmark interest rates stand at an all-time low of 2% for the overnight reverse repurchase facility, while the overnight deposit and lending rates are at 1.5% and 2.5%, respectively. The BSP’s Monetary Board has kept these settings unchanged for three consecutive meetings as it continues to support the economy amid elevated risks from the surge in COVID-19 cases.

Economists continue to see the central bank keeping an accommodative stance at the next monetary policy meeting on May 13.

“We expect BSP to remain on hold for the whole of 2021 to provide support to the economy and we believe inflation will begin to decelerate further in May as supply side issues are addressed by supply side remedies,” ING Bank N.V. Senior Economist Nicholas Antonio T. Mapa said in a statement.

In an e-mail to BusinessWorld, Asian Institute of Management economist John Paolo R. Rivera said inflation in the coming months would depend on the supply side.

“This will be dependent on developments in containing the COVID-19 pandemic; arresting the consequences of African Swine Fever; managing the factors affecting supply of basic necessities and essential services like transportation and communication; and threading external shocks like volatilities in oil prices,” he said.

“At the current rate the economy is going, there is a huge likelihood that policy rates will be held constant until a deceleration of inflation is manifested within target bands,” he added.

“Support is likely to come via regulatory and liquidity channels and not rates, for now,” they said in a note.

HSBC Global Research economist Noelan Arbis said the pressure on the BSP to act against inflation has “dissipated” given the easing inflation trend.

“We believe an additional rate cut at this juncture would not do much to boost the economy given ongoing lockdowns, while it remains far too early to begin policy normalization,” he said.

“BSP Governor Benjamin Diokno has recently noted that an additional cut on the reserve requirement ratio (RRR) is on table, but with ample liquidity in the market, we believe it is unnecessary. We expect the RRR to remain at 12% this year,” he added. — Lourdes O. Pilar with inputs from Luz Wendy T. Noble

Why innovation is the key to sustainable business

Monde Nissin gets investor commitments for $1-B IPO