The ongoing rebound in US stocks has been uneven across the main factor strategies, but two corners stand out as revival leaders: large-cap growth and momentum. On both fronts, these risk factors are the first to return to positive year-to-date performances, based on a set of exchange-traded funds.

Leading the field this year, for absolute and relative performance, is a large-cap growth proxy via the iShares S&P 500 Growth ETF (IVW). The fund has recently turned positive for the year to date, with a 4.8%-gain for 2020 as of yesterday’s close. Thanks to a mostly non-stop rally in recent weeks, IVW is now less 4% below its previous high that was set just before the coronavirus correction started in late-February.

Running close in second place this year is the momentum factor via the iShares Edge MSCI USA Momentum Factor ETF (MTUM). This ETF has also returned to positive terrain on a year-to-date basis with a 1.4% gain.

By contrast, the rest of the factor-field continues to post losses in varying degrees, although ongoing rebounds have trimmed the year-to-date declines in recent weeks. The darkest shade of red at the moment is found in the iShares S&P Small-Cap 600 Value ETF (IJS), which is down 25.0% so far this year. That’s a hefty set-back, although it’s better than the 45% haircut that weighed on IJS at the depth of the broad market correction in late-March. 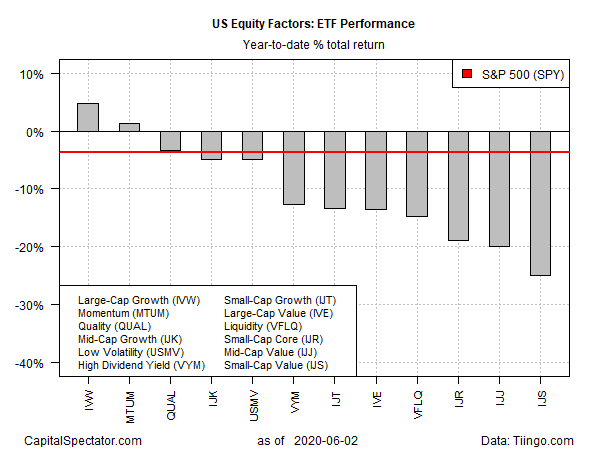 US stocks overall are still underwater for the year so far, although the broad market proxy is making up ground quickly. The SPDR S&P 500 (SPY) has rallied in the last three trading sessions and closed on Tuesday at its highest since March 4. Year to date, the SPY has pared its losses to a relatively modest 3.7% decline – a dramatic turnaround from the 30% year-to-date loss as of March 23.

By some accounts, the market’s rise defies logic, given the ongoing economic carnage from the coronavirus and, more recently, social unrest from protests over the death of George Floyd, who died last week from after he was pinned to the ground by a police officer. But logical or not, Mr. Market has embraced a conspicuous risk-on posture lately.

“Despite several issues of importance — national riots, Chinese relations, an ongoing pandemic — the stock market is primarily focused on a single thing: the restart of U.S. and global economic activities,” says Jim Paulsen, chief investment strategist at the Leuthold Group.

A broad profile of all the factor ETFs listed above confirms the revival in animal spirits of late, based on two sets of moving averages. The first measure compares the 10-day average with its 100-day counterpart — a proxy for short-term trending behavior (red line in chart below). A second set of moving averages (50 and 200 days) represent an intermediate measure of the trend (blue line). Data through yesterday’s close shows that short momentum (red line) has rebounded sharply in recent weeks. No sign yet of movement in the longer-term momentum measure, which remains pinned at zero. 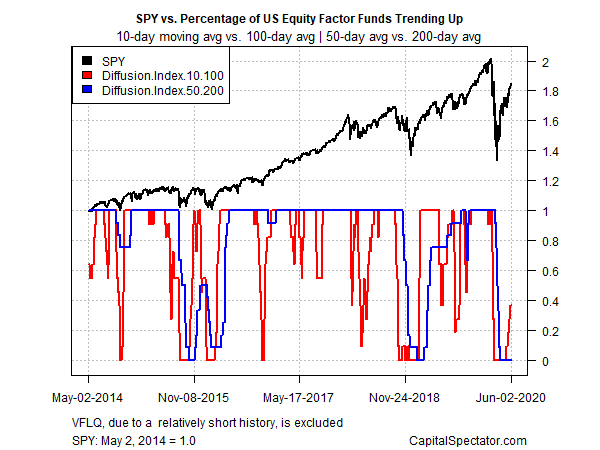 SPY vs Percentage Of US Equity Factor Funds

Why The Recovery Will Fall Short Of Forecasts

Chart Of The Day: Gilead Cools As Market Turns Elsewhere For COVID-19 Cure