Over the past few years, Wells Fargo (NYSE:WFC) has been trading against some major headwinds, including an ongoing scandal that began in 2016 involving the creation of thousands of fake accounts purportedly belonging to actual customers, which occured so that management could claim growth targets were being met.

Nonetheless, trading patterns suggest investors might be considering it a good buy ahead of its Q2 earnings report, which takes place Tuesday, July 15 before the open. But why would they?

Earnings have disappointed over the last three quarters and analysts expect this upcoming release to be similar–including a lower EPS that’s fallen into negative territory. While the other big US banks have managed to keep their dividends steady, WFC’s CEO Charles Scharf broke from the pack, saying the bank would likely trim its payout in the third quarter.

Moreover, the bank said it may need to dramatically increase its allowance for loan losses, which would erase nearly all its profits, potentially damaging future dividend payouts yet further. If the bank will, in fact, report negative earnings, new Federal Reserve regulations would force the bank to reduce, or even halt its dividend.

And speaking of the Fed, the central bank has been limiting Wells Fargo’s growth after its earlier scandal. Therefore, WFC hasn’t seen much expansion since late 2019, when it reached its growth cap.

With so many obvious roadblocks what could possibly make the stock appealing? The following technical patterns suggest there are one or two reasons. 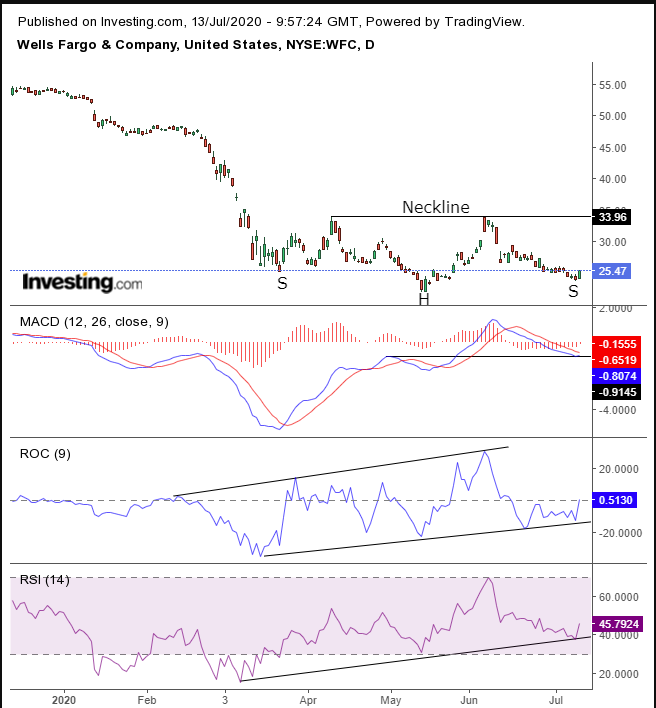 Since the end of the March, coronavirus-related selloff, the price found support above $20. Friday’s jump was the third time this happened. If the pattern reoccurs, we can expect another test of the $34 level.

Momentum indicators RSI and ROC say as much, having provided a positive divergence–rare when the broader market is rife with negative divergences. As well, the MACD found support for now.

If prices do, in fact, return to the April and June highs, it will be on the cusp of completing a H&S bottom.

The chart may be revealing that after underperforming its financial peers, investors are willing to consider a position in the bank at a price worth holding onto for the long-term. Perhaps too, informed money knows something we don’t.

Either way, for now, any upside surprise in its corporate results could put the stock on track to return to the $34 level, when investors are so eager to add risk, despite a pandemic that appears to be out of control.

Conservative traders would wait for an upside breakout, with at least a 3% penetration to above $37, where the price will find support for at least three days, preferably to include a weekend, then wait for a pullback that demonstrates support above $34, before committing to a long position.

Moderate traders might be content with a 2% penetration of the neckline, to above $36, with at least a two-day filter. They, too, might wait for a return move, for a better entry, not necessarily for confirmation of the trend.

Aggressive traders could risk a long position now, provided they understand and accept the risk. Dollar Drops Vs Most Majors Ahead Of U.S. Consumer Sentiment Index Loonie Falls Vs Most Majors Ahead Of Canada Housing Starts

9 Monster Stock Market Predictions For The Week of April 13