NEARLY a million Filipinos in rural areas do not have access to digital connections, as most cell towers are located in wealthy cities, according to an analysis by Asian Development Bank (ADB) and Thinking Machines Data Science, Inc.

Only 9.5% of the 9.4 million Filipinos in poor areas live within 500 meters from a cell tower, ADB and Thinking Machines said in an analysis published on Feb. 1, citing data from the Project Bandwidth and Signal Strength (BASS).

“This leaves almost 850,000 Filipinos beyond the scope of cell site serviceability,” the authors said.

As for the average mobile download speed, those living in the richest cities experience 25.77 Mbps, while users in the poorest cities only get 7.04 Mbps.

The ADB-Thinking Machines analysis noted sufficient internet speed in the Philippines is at least 3.2 Mbps, and only 6% of the population in the poorest cities have access to it as compared with the 100% rate in the wealthy cities.

Clusters of cell towers are found in urban areas like Cebu City, Puerto Princesa, and Davao City, “but none of these compare to the breadth and density of towers in Metro Manila with the largest concentration of cell sites.”

There are also large gaps in mountainous areas in the northern Philippines, they said.

“Up to 600,000 people on mobile and up to 1.4 million people on fixed broadband either have speeds slower than 3.2 Mbps or did not run a speedtest and are thus not included in the Ookla data,” the analysis said.

Aside from BASS statistics, the ADB and Thinking Machines also used data from Speedtest by Seattle-based Ookla LLC. to analyze spatial patterns of digital inequality.

Their objective is “to better inform and target strategic investments for digital development” using big data and machine learning.

“The insufficiency of digital infrastructures in the country is a result of multiple factors, including stringent restrictions in the telecommunications market leading to a lack of competition and high barriers to entry,” they said.

Malacañang has said the National Government would continue to exert more pressure on telecommunications firms to improve their services.

Hastings Holdings, Inc., a unit of PLDT Beneficial Trust Fund subsidiary MediaQuest Holdings, Inc., has a majority stake in BusinessWorld through the Philippine Star Group, which it controls. 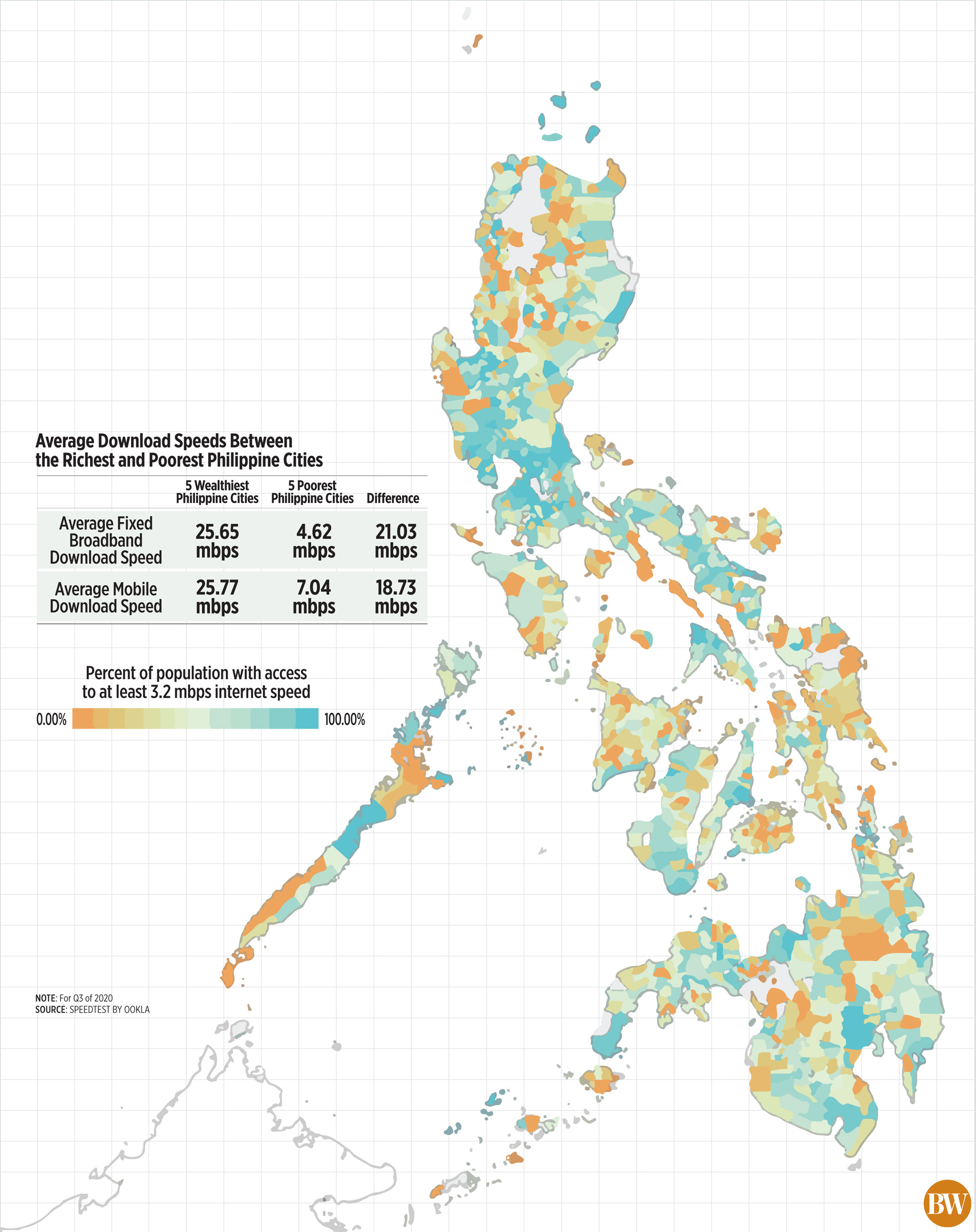 Average Download Speed Between the Richest and Poorest Philippine Cities