Both media giant Disney (NYSE:DIS) and the international coffee-chain Starbucks (NASDAQ:SBUX) have seen their businesses turned upside down by the global coronavirus outbreak and worldwide lockdowns.

Each company, considered symbols of American consumerism, has suffered massive losses this year as customers stayed indoors and the pandemic forced closures of their operations. But as economies reopen globally, both companies are being closely watched as a barometer of consumers’ willingness to resume their normal lives and reopen their wallets.

For investors, shares of each could also offer an attractive risk-reward proposition, especially when there is considerable uncertainty about the pandemic’s future path. Here’s a deeper look:

The House of Mouse is in the middle of a nasty downturn. Its core business, which thrives on shared group experiences, is suffering after the global spread of COVID-19 forced the closure of its theme parks, resorts, movie theaters and cruises worldwide.

Hurt by this unprecedented challenge, Disney reported a $1.4-billion shortfall in its operating income for the first quarter, including a $1-billion hit coming from shuttered theme parks alone, and the rest from other business units. 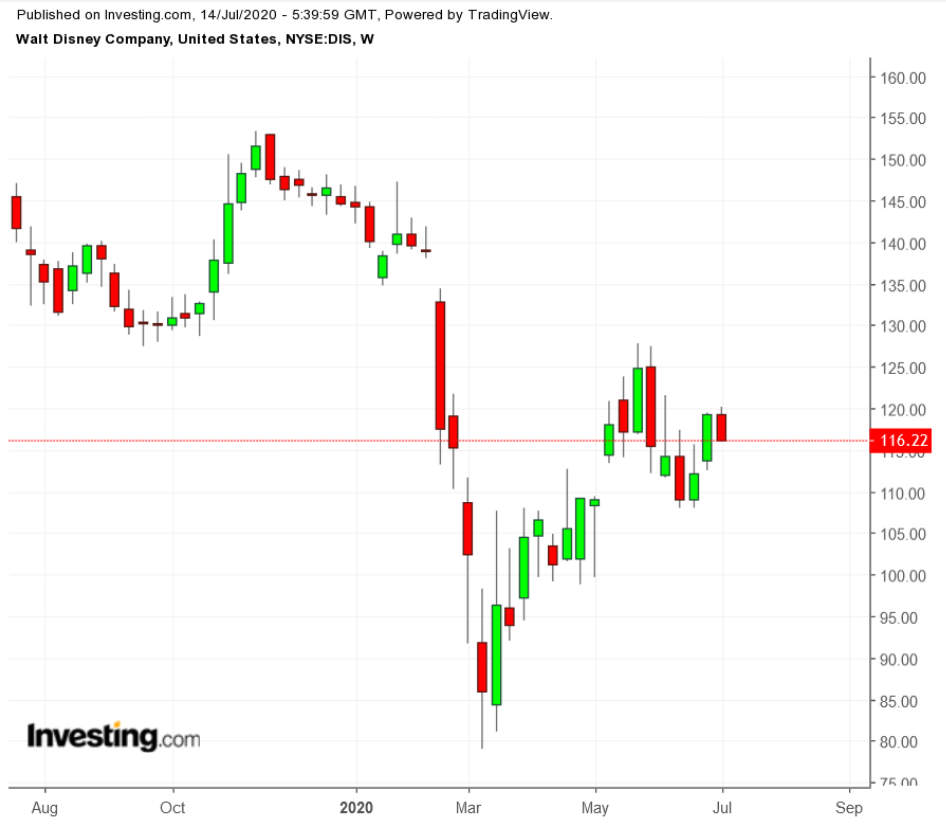 Despite this devastating impact on its global business, investors have started to take a positive stance on Disney stock, betting on the company’s new video-streaming business and the gradual reopening of its entertainment assets.

The Burbank, California-based company’s shares, after plunging more than 40% by the middle of March, have recovered considerable ground since then. They closed on Monday at $116.22, down 17% for the year.

One bright spot in this otherwise gloomy outlook: the company’s newly-launched Disney+ video streaming service. Boosted by stay-at-home orders, the service is expanding quickly. It’s grabbed more than 56 million subscribers since its launch in November. Though still burning cash, Disney+ is in strong growth mode and could become one of the company’s major revenue-generating units in the post-pandemic world.

According to a recent note by Goldman Sachs, investors are undervaluing the strength of the Disney+ service which is expected to reach 150 million subscribers by 2025. The Wall Street firm initiated coverage of Disney with a buy rating and a $137 per share price target. That’s more than a 14% upside from the stock’s Friday close.

“When we opened up our reservation system, we were pretty pleased with the demand that we saw and that demand is not only showing up in the short-term, but it’s also showing up well into 2021,” Disney Parks Chairman Josh D’Amaro said in an interview with Bloomberg TV.

“Our guests, they trust us, they trust that we’re going to create an environment that they could still experience the magic in.” 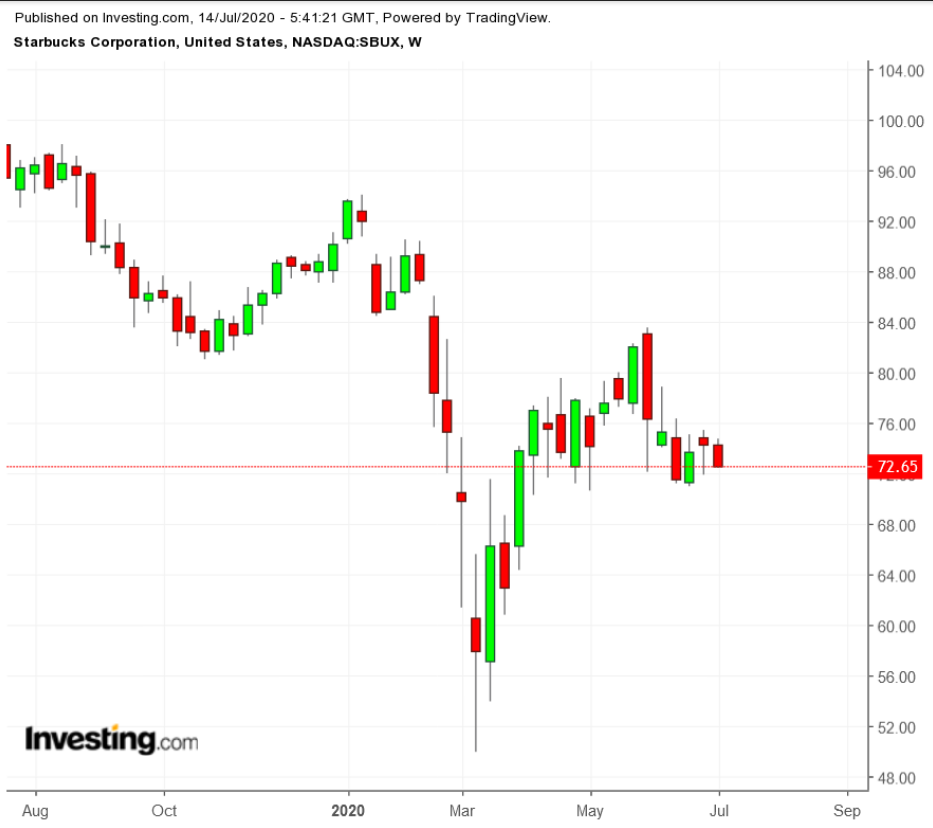 Shares of the international, specialty coffee purveyor are down 15% so far in 2020, less than many restaurant peers. The stock closed on Monday at $72.65. It also offers an annual dividend yield of 2.21%.

According to the company’s latest guidance, its 2Q sales will fall by as much as $3.2 billion, while operating income will decline as much as $2.2 billion in the period. The prospects for food chains, including Starbucks, remains uncertain in the post-pandemic world where some consumers are likely to alter their behavior permanently and avoid visiting restaurants.

That being said, the Seattle-based Starbucks is an innovative company and it’s quickly changing its business model to counter the pandemic-related slowdown.

Starbucks plans to accelerate the rollout of its “pickup” store concept, with smaller-format locations that don’t have customer seating, the company told investors last month.

“While we had originally planned to execute this strategy over a three- to five-year timeframe, rapidly evolving customer preferences hasten the need for this concept.”

The pandemic has forced Starbucks to rethink its central concept as a “third place” away from work and home where customers can relax, it said.

Starbucks expects to open 300 net new stores this fiscal year in the Americas, half its earlier estimate. That includes the closure of 400 company-operated outlets over the next 18 months alongside the opening of a “greater number of new, repositioned stores in different locations and with innovative store formats.”

We like both Disney and Starbucks for value investors who want to take advantage of their current weakness and hold them in their portfolios over the long-run. Both companies have great assets and brands which should endure the current downturn and emerge from it once the pandemic is contained.

At the same time, it’s obvious that their earnings won’t return to normal until there’s a global cure available for the coronavirus. For long-term investors with a five-year or longer horizon, both Disney and Starbucks shares remain a good bet.