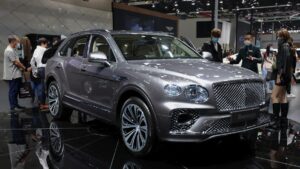 Car-makers are ordering suppliers to build up at least five days of parts. Bentley is amassing enough stock to last a month amid fears of customs delays at ports.

Online grocer Ocado has built up more than two weeks of non-perishable goods such as pasta and tinned tomatoes.

Stockpiling was partly to blame for lorry queues of up to 10 miles in Calais yesterday, with the end of the Brexit transition period less than 20 days away. Financial markets began to react last week, with the pound losing 2% against the euro.

The automotive industry is already being hit by shortages, with Honda and Jaguar Land Rover curtailing production last week. Car-makers usually hold minimal stock, as about 1,100 lorries a day bring parts from the Continent, but they are sacrificing efficiency in an attempt to avoid much more costly line stoppages.

“The millions of pounds it costs [to stockpile] is better than the hundreds of millions that we would lose from not being able to build cars,” said Adrian Hallmark, boss of Crewe-based Bentley.

The UK usually has about two weeks’ food stocks and in an emergency can cope with four weeks. However, Peter Ward of the UK Warehousing Association said there was little storage space available because of Christmas, Covid-19 and the online retail boom. Trump pulls statistically even with Biden in Florida; Arizona is a dead heat: Reuters/Ipsos

How to import from China with a sourcing agent?