It seems as if there’s nothing that will derail Tesla’s (NASDAQ:TSLA) stock right now. Every dip is just the harbinger for a new upward move that sends shares of the electric carmaker to new highs.

Here’s the latest example: since CEO Elon Musk tweeted on May 1 that Tesla’s stock price was too high, shares have soared another 29%, bringing this year’s gains to a whopping 140%. 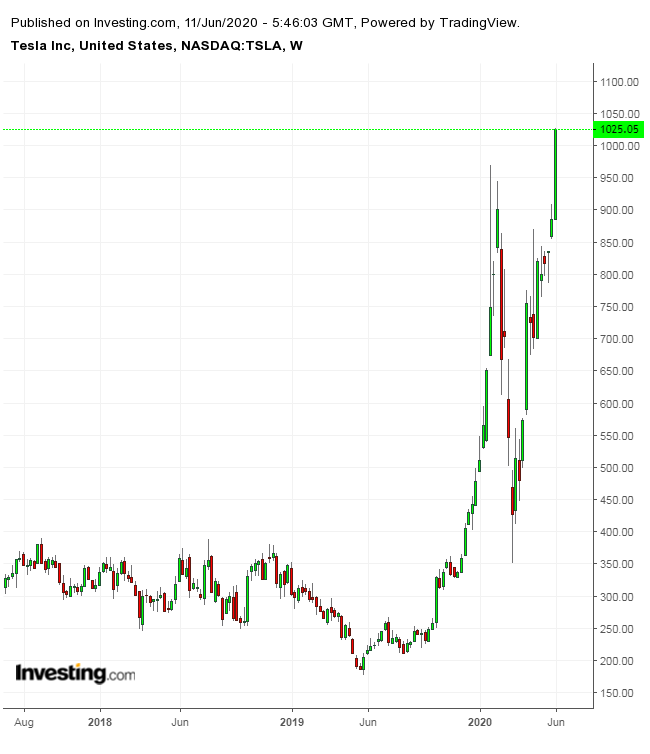 This remarkable rally continues despite plant closures and demand destruction due to the crisis triggered by the COVID-19 pandemic. But Tesla investors are focused elsewhere. They have their eye on the post pandemic boom in which Tesla is ideally positioned to take advantage of its lead in the electric vehicle market.

Analysts are pointing to strong indications that the carmaker has been able to turn the corner after an array of missteps in 2019. The company’s recent quarterly results have been strong, with better-than-expected deliveries, even during the coronavirus pandemic.

The latest boost to Tesla stock was triggered by data showing car sales in China rose last month, for the first time in almost a year. Tesla’s cars were the top-selling electric vehicles with more than 11,000 units sold, according to the China Passenger Car Association. Overall, the Palo Alto, California-based company’s vehicle sales in China increased by 205% from a slump in April, attributed to COVID-19 impacts on consumers and businesses in China.

Registrations of Tesla vehicles in China rose to a record in March after the company resumed production at its Shanghai plant which was temporarily idled because of the coronavirus pandemic in Asia.

Because of these positive developments, some analysts believe Tesla stock has more room to run. While raising its price target to $1,000 from $800, Wedbush said in a note yesterday the main catalyst for the rally in Tesla shares continues to be the massive China market which is showing clear signs of a spike in demand. According to the note:

“We believe with demand for Model 3?s ramping stronger than expectations in China heading into summer timeframe, the lockdown easing in the US/Europe, and some potentially “game changing” battery developments on the horizon (Battery Day likely in late June) that Tesla’s stock likely has room to run further.”

Adding to conviction on the stock, a Chinese manufacturer that makes electric-car batteries for Tesla and Volkswagen (OTC:VWAGY) has developed a power pack that lasts more than a million miles, according to a Bloomberg report. Contemporary Amperex Technology (SZ:300750) announced it’s ready to produce a battery that lasts 16 years and 2 million kilometers (1.24 million miles).

“Extending that lifespan is viewed as a key advance because the pack could be reused in a second vehicle. That would lower the expense of owning an electric vehicle, a positive for an industry that’s seeking to recover sales momentum lost to the coronavirus outbreak and the slumping oil prices that made gas guzzlers more competitive,” the report says.

Too Late to Buy?

If you haven’t invested in Tesla shares as yet or you haven’t been following this story closely, you may be wondering whether the ship has sailed. Is it too late to buy into the stock after such a powerful run?

There is no simple answer.

Wall Street remains very divided over Tesla’s outlook. Of the 23 analysts who cover this stock, 8 have a buy rating on it while a similar number recommend holding. Seven have given it a sell call, with $633 as an average price target for the next 12 months.

Tesla bulls may be feasting on the strong fundamentals generated by Tesla’s improving deliveries and optimistic China prospects. But some investment advisors warn that this eye-popping rally has a lot of emotions fueling it, rather a pure financial justification.

Tesla stock may continue to rise in the short-run on the positive sentiment and improving outlook for the EVs market. But investors should remember that Tesla is a highly speculative play which could reverse course quickly.

After such a powerful run, it’s best to be cautious. For investors interested in buying shares, the smarter move would be to wait for another, better entry point.