The answers to a question such as this is never binary, but a weighing of the probabilities. 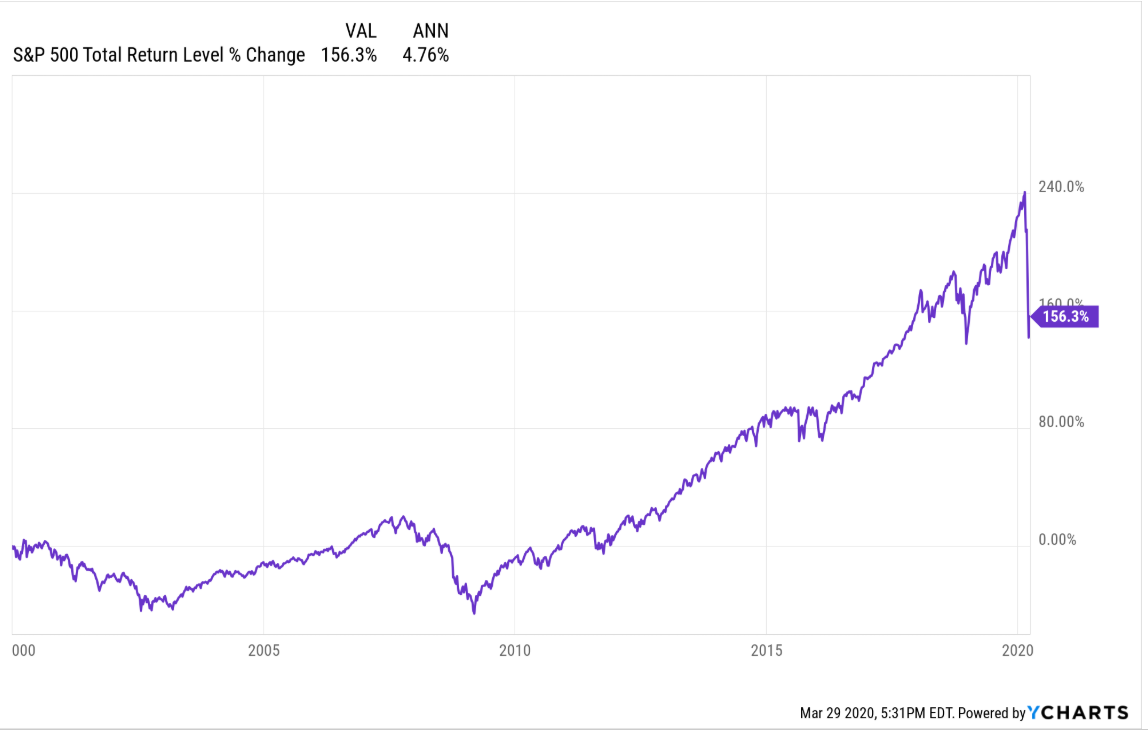 This blog has showed this chart on previous occasions, including last September ’19, and August, 2018.

DataTrek addressed this issue on Wednesday March 25th, 2020, and the conclusion was interesting:

#3: At the other end of the investment horizon spectrum, let’s consider what the recent downdraft has done to long run (20-year) compounded annual returns for the S&P 500 and why that matters:

Here’s why all that’s important:

Lower equity returns push capital into passive investments. Readers with long memories will recall that the late 1990s was the peak for active US equity management. There’s a good reason for that: you can pay an active manager 1-2% when presumed structural returns are 18% in the hopes of making 25-30%. When they are just 6-7%, every basis point of fees matters.

Lower structural public equity returns encourage institutional asset owners to reallocate capital to alternative investments like private equity and venture capital. Sovereign wealth/pension funds, family offices, and other managers have return targets they need to hit. Public equity returns of 6-7% don’t necessarily cover those, so they 1) index their stock exposure and 2) shift capital to potentially higher return non-public investments. Case in point: according to Crunchbase, from 2010 to 2019 total dollars invested in venture capital went from $48 billion to $295 billion annually.

When you combine lower structural equity returns with bouts of historically high stock market volatility and save-the-baby government policy interventions, investors (especially older individuals) are going to downshift their portfolio risk profile. We’ve seen this happen all through the 2010s, as US mutual/exchange traded money flows saw consistent outflows from stocks (despite a long rally) and into fixed income (despite ever lower yields). Given what has unfolded in recent days, we doubt that trend will reverse course regardless of where US stocks end the year.

If DataTrek’s three summary points are read, it makes a logical case for why the secular bull market in US stocks could be waning.

However (again) here is why I would think the secular bull might continue:

1.) The average annual return is still below average, even more so over the last 6 weeks, but it was below average even near the peak of the market in mid-February ’20;

3.) If we start measuring this secular bull market from the time we surpassed the old S&P 500 high from October, 2007, the new bull market is just 6.5 years old.

Summary / conclusion: The one unstated conclusion from DataTrek’s analysis is that maybe passive investing has peaked. That will only be known in hindsight. As this is being written on Sunday night, the President is saying that social-distancing will be extended until April 30th, 2020, which likely means another stimulus program, and continued disruption of normal American life.

Again, this is just one opinion, but with social disruption occurring in the US as it is today, the “gloom-and-doom” crowd loves to call the end of the world and thus the end of the secular bull market is now over, and another one will start.

Again, this is just one opinion but of the lows for the S&P 500 are in for this “bear market” with a test of the December ’18 lows and the S&P 500 treads water and makes a new all-time high in the next 12 months, would the secular bull market really be over?

Thanks for reading and remember to take all opinions regarding Wall Street issues and events with great skepticism. The capital markets change quickly.

Be Careful When Chasing Cheap Stocks

Apple Vs. Microsoft: Which Tech Giant Is The Better Buy?

Could a green new deal turn South Korea from climate villain to model?