When the largest U.S. lending institutions, including JPMorgan Chase (NYSE:JPM), Citigroup (NYSE:C), Bank of America (NYSE:BAC), Goldman Sachs (NYSE:GS) and Wells Fargo (NYSE:WFC), report Q1 2020 earnings this coming week, investors will likely be presented with a seriously ugly picture. It’s likely global financial institutions have suffered a massive blow to their businesses in the wake of the coronavirus outbreak.

There’s hardly any segment of the banking business which hasn’t suffered in the wake of global lockdowns put in place to prevent the spread of the disease. As well, during the first quarter, interest rates have fallen to near zero as the Fed unleashed unprecedented monetary stimulus, in order to fuel growth. At the same time, consumers have drastically cut spending–the main engine of U.S. economic growth over the past decade.

It’s expected that, going forward, lenders will face a deluge of delinquencies from companies in industries essentially shut down by the virus–hospitality, tourism, restaurants to name just a few–that are now fighting for their survival. This dismal situation, with a recession just round the corner, means the U.S. large cap banking stocks have underperformed the broader market. 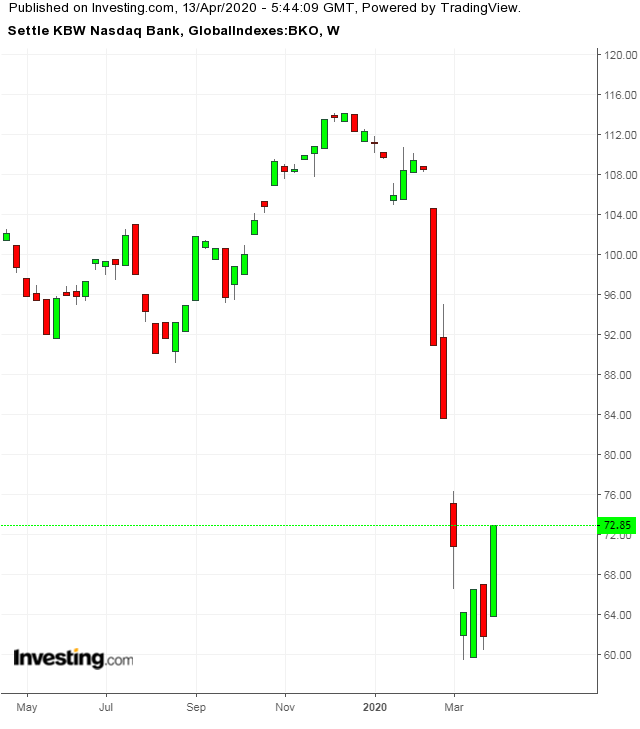 The KBW NASDAQ Bank Index plummeted 42% in the first quarter, its worst start to a year on record.

Analysts at Goldman Sachs say earnings per share for large cap banks could fall 40% from initial estimates in 2020, 16% in 2021 and 10% in 2022. They added that higher net interest income on the back of strong loan volumes won’t be nearly enough to offset credit losses and other headwinds.

Another report by Oliver Wyman and Morgan Stanley, released over the weekend by Bloomberg, says a “new wave of consolidation” among global investment banks could be triggered by the coronavirus pandemic. It goes on to say that indeed, some banks may find their lack of scale and the short-term pressure “too acute” to survive the crisis, particularly in Europe where returns are lower compared to bigger, more profitable global banking rivals.

Analysis in the report shows that even in a “rapid rebound” recession, lasting up to six months, there could be a 100% decline in earnings this year.

In a worst case “deep global recession” scenario, lasting a year or longer, earnings could fall by 277% and there could be significant losses for weaker banks. The report states that credit losses could surge to between $200 billion and $300 billion, compared with $30 billion to $50 billion if a rapid rebound occurs.

The chief executive officer of JPMorgan Chase, Jamie Dimon, in his annual letter said the coronavirus pandemic will lead to a major economic downturn, similar to what investors saw during the 2008 meltdown that nearly caused a collapse of the U.S. financial system.

“At a minimum, we assume that it will include a bad recession combined with some kind of financial stress similar to the global financial crisis of 2008,” according to Dimon. “Our bank cannot be immune to the effects of this kind of stress.”

Dimon, the only current CEO who steered a major U.S. bank through that financial crisis, said JPMorgan’s earnings will be “down meaningfully” this year, though the bank is “unlikely” to cut its dividend. Such a move would only result from “extreme prudence,” he said. 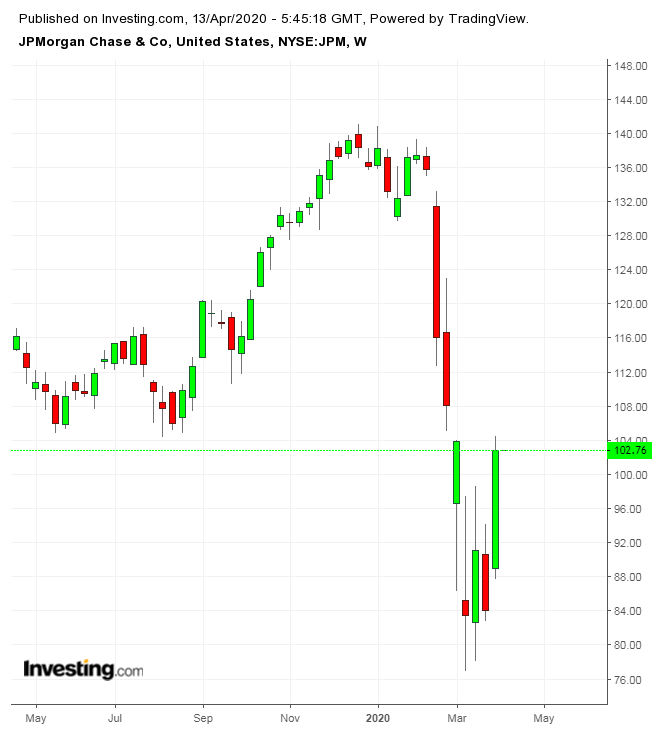 JPMorgan will give more details on the impact of the current pandemic situation when it releases its first quarter numbers on Tuesday, April 14, before the market opens. Analysts are expecting $2.2 a share profit on sales of $29.5 billion.

Another lender we’re focusing on is Citigroup, which will report Q1 earnings before the market opens on Wednesday, April 15. Along with the bottom line numbers, investors will also be eyeing Citigroup’s efficiency ratio, or expenses as a percentage of revenue. This metric has come in at less than 60% for the past four years, making Citi the only major global bank able to maintain such a winning streak.

Our view is that both JPMorgan and Citi are well prepared to cope with any deep downturn, thanks to their sustained cost-cutting during the past decade and re-balancing of their portfolios.

After the devastation brought on by the pandemic, it’s certainly not the best time to go all in on banking shares. But investing in financial stocks should be a long-term bet, rather than focusing on factors that affect their short-term outlook.

For buy-and-hold investors, we like both Citi and JPM given their diversified portfolios, dividend strength and robust yields–the former at 4.61% annually, the latter at 3.82%–along with the improved quality of their balance sheets.

Carbon emissions from fossil fuels could fall by 2.5bn tonnes in 2020