If you believe, as most rational investors do, that oil and gas as compacted sources of energy are likely to continue to be important in the coming years, you might be looking at the very best of the integrated major oil and gas companies.

Here is an alternative to consider.

The Permian Basin in west Texas has staggering potential to drive the United States even further into providing the oil and gas needed by an energy-hungry world.

I believe Russia’s production is likely to decline as a result of its failure to invest in new technology. And Saudi Arabia, having squandered one of the world’s great aquifers, must now use more than 1 million barrels per day of its production to desalinate sea water.

The Permian Basin in Texas, once thought mostly played out, is today producing as much as oil-rich OPEC member Kuwait!

There are some 26 exploration and production firms with active wells in the Permian Basin. But many of them have their own problems, even as they are producing more oil and gas from the region. These include:

Texas Pacific Land Trust (NYSE:TPL). Well, it is a land trust today, but after a nasty years-long proxy fight, it will be converted to a corporate structure as soon as the end of this year.

People complain they sold Amazon (NASDAQ:AMZN) too soon or Apple (NASDAQ:AAPL) too soon. 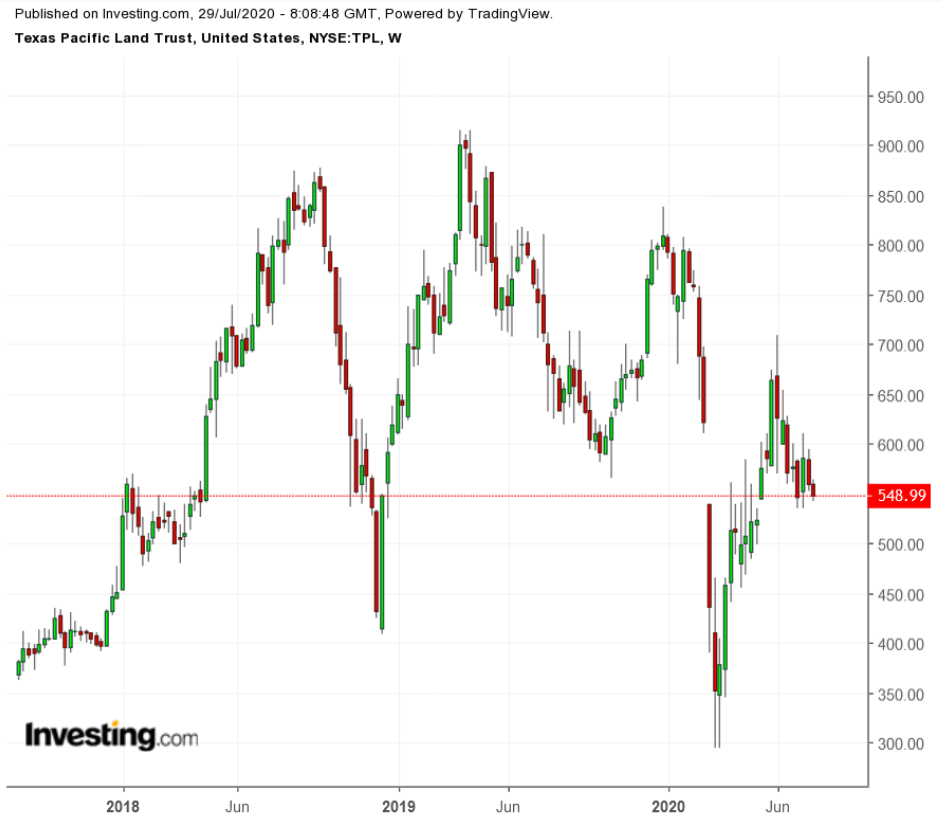 Just a few words as a refresher for those who have forgotten or are new to TPL: it is a trust formed when the Texas Pacific Railway Company was created in 1871 to build a southern transcontinental railroad between Marshall, Texas, and San Diego, California. At the time, this was not a particularly lucrative endeavor and the railroad went bankrupt.

The bankruptcy court ordered the company had to begin selling off its Connecticut-sized landholdings to repay its original bondholders. It was then worthless desert scrubland, so sales were not exactly spectacular. Or even in evidence.

With the discovery of oil and gas in this amazing basin, however, all that changed. What did not change is that TPL is still the biggest landowner in and around the Permian. It holds all mineral rights in those areas and, even bigger, all water rights, a most precious commodity not just to frackers but to every living thing.

TPL has a total employee base of fewer than 100 people–and most of them were added only since the company began selling water, as well as mineral rates, and the occasional piece of land. (The original bondholders, or their heirs were paid off long ago.) In 2016, there were a total of 10 employees. Not a lot of overhead there. It just doesn’t take that many people to answer the doorbell when Exxon Mobil (NYSE:XOM) or Chevron (NYSE:CVX) come calling to ask if they might lease some portion of TPL’s property in 20 West Texas counties.

Texas Pacific lives on the royalties it collects. There was no time limit set for selling off the properties per the original court decision, so it is only when El Paso, Odessa or Midland are bursting at the seams and paying much more than the royalty income that TPL might sell off some more property.

Texas Pacific is the closest thing to a cash machine in the country. The only other equally brilliant cash flow machine, about which I have also often written, is Franco-Nevada Corporation (NYSE:FNV), headquartered in Canada but just as easy to buy as TPL.

I believe TPL stock is a little ahead of itself right now, given the glut of oil and gas in the Permian and the pipeline congestion to get the product out to the refineries. At yesterday’s closing price of $549, it sells for less than 20 times earnings. I own some in our Model Portfolio at $366.15, so I may be a bit biased here. Anytime TPL shares go below $500, I will buy a little. Below $400, I will back the truck up.

Disclosure: I am long TPL. Unless you are a client of Stanford Wealth Management, I do not know your personal financial situation. Therefore, I offer my opinions above for your due diligence and not as advice to buy or sell specific securities. Bubbles Forming? Lighten Up On The Nasdaq 100 Are These 3 Top-Ranked Mutual Funds In Your Retirement Portfolio?- March 13, 2020