Most of the major asset classes mounted a strong rebound in the shortened trading week through Thursday, Mar. 9, led by US real estate investment trusts (REITs), based on a set of exchange-traded funds. The lone exception: broadly defined commodities, which continued to slump.

Vanguard US Real Estate (NYSE:VNQ) posted a blowout gain of more than 22% last week. Despite the fund’s monster rally, VNQ remains far below its previous peak, reached in late-February, nursing a 20% drawdown.

Big gains were also posted in other corners of the global markets last week, including US stocks. Vanguard Total US Stock Market (NYSE:VTI) surged 13.0%. Here, too, the powerful rally only recovered a portion of the losses following the sharp selloff since February.

The only slice of the major asset classes to lose ground last week: broadly defined commodities. The iShares S&P GSCI Commodity-Indexed Trust (NYSE:GSG) fell 3.1%, leaving the fund near its lowest level since it began trading in the mid-1990s.

The broad-based rally in markets last week lifted an ETF-based version of the Global Markets Index (GMI.F). This unmanaged benchmark that holds all the major asset classes (except cash) in market-value weights via ETFs surged 8.4% over the five trading days through Thursday’s close. 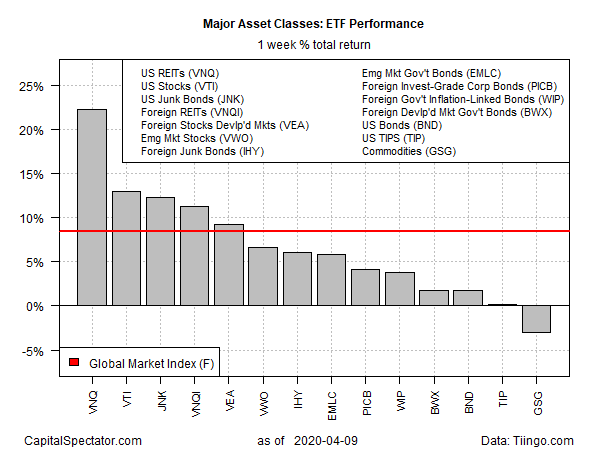 Turning to the one-year trend, US investment-grade bonds are in the lead for the major asset classes. Vanguard Total US Bond Market (NASDAQ:BND) is up 5.0% on a total return basis for the one-year window through Thursday’s close.

A close second-place performance is currently held by inflation-indexed Treasuries for the trailing 12-month window. The iShares TIPS Bond ETF (NYSE:TIP) closed up on Mar. 9 by 9.7% vs. the year-ago level after factoring in distributions.

Commodities continue to remain dead last: iShares S&P GSCI Commodity-Indexed Trust (GSG) has lost more than 39% over the past 12 months.

GMI.F remains in the red over the trailing one-year window but last week’s rally helped to pare the red ink. The benchmark is currently down by a relatively modest 3.5% vs. the year-ago price. 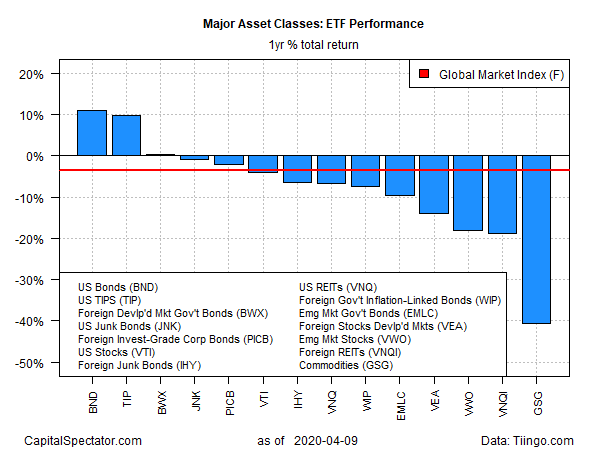 Ranking the major asset classes by current drawdown shows that only US investment-grade bonds (BND) and inflation-indexed Treasuries (TIP) are trading near their previous highs. 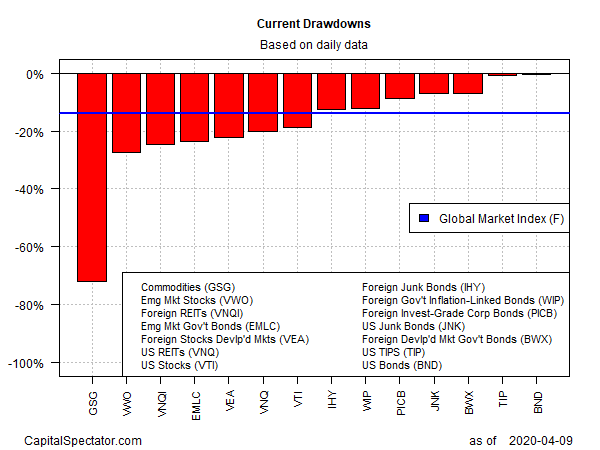 Current Drawdowns Based On Daily Data