This past week began with a double whammy of lower oil prices and lower stock prices. As the week continued, things just got worse. The coronavirus and it’s effects on daily life and the economy were the main focus, as many global indices fell into bear market territory. By the end of the week, the US Dollar had become the “flight to safety” asset, as gold was down almost 9% and BTC down nearly 37%. Travel bans, border closings, social event bans, central bank interventions, fiscal stimuli, and national emergency measures were put into place over the rest of the globe this past week, for those who hadn’t done so already. Next week will be key to see if these measures begin to work!

The week started with Saudi Arabi announcing that they will push back against Russia in the oil production game and pump as much as possible to counter Russia’s response to OPEC. Russia said they would not cut back their output, although OPEC had agreed to. No deal is better than a partial deal. With that news, along with the continued spreading of the coronavirus, crude oil gapped lower from 41.58 on Friday to 32.87 on Monday. Crude lost nearly 25% in 1 day after losing 10% on Friday! Along with Crude, the S&P 500 gapped lower on Monday and opened “limit down”, which occurs when markets are down 5% in pre-market trading. The S&P 500 lost 7.3% on Monday.

As the week continued, volatility continued and the VIX was up another 50% this week, while global stock markets were down 10%-14%. Gold lost its status as a “flight to safety” as stock markets were sold. Because of the rapid nature of the selloff, traders had to sell whatever they held to raise cash or else face a margin call. Gold lost almost 9% this week. The US Dollar, on the other hand, is where the big money landed. As more Fed intervention and fiscal stimuli was delivered, it became apparent that the US Government would save their economy (once again). The DXY closed the week up 2.65% , USD/JPY closed up 2.75%. EUR/USD closed down 1.92%, and GBP/USD closed down 5.63% (Yikes!)

Fiscal and Monetary stimulus continued around the globe. Central Banks slashed interest rates and injected cash into the markets as fears mounted that liquidity could dry up as firms tapped credit lines. They learned their lesson in 2008. Individual state governments also proposed or passed spending bills for billions of dollars to help individuals and businesses who are, or will be, affected by the coronavirus. There is surely more to come, as the Fed and BOJ meet this week. As recent as Friday afternoon the BOC had an emergency rate cut by 50bps, to 0.75%.

The number of coronavirus cases globally will undoubtedly continue to rise. As the numbers rise, traders and markets will be watching the response of individual governments to see if they are doing “enough” to contain the virus. If markets feel that governments are in control than stock markets will go bid and funds will flow to those currencies. There will be most likely be more stimuli and central bank action. The BOJ and the FOMC will both meet this week. In addition, there will continue to be travel disruptions which will continue to plague the oil industry.

For now, primaries are proceeding according to schedule next week as Arizona, Florida, Illinois, and Ohio head to the polls. It is down to a 2-man race in the democratic primaries. Joe Biden currently has 881 delegates and Bernie Sanders has 725. Whoever reaches 1,991 delegates first will be the democratic nominee to face President Trump in November.

As with this past week, economic data will most likely not be much of a catalyst for market moves. However, China data on Monday will be watched closely to see how the coronavirus has impacted the economy. Below are some of the more important releases for this week: 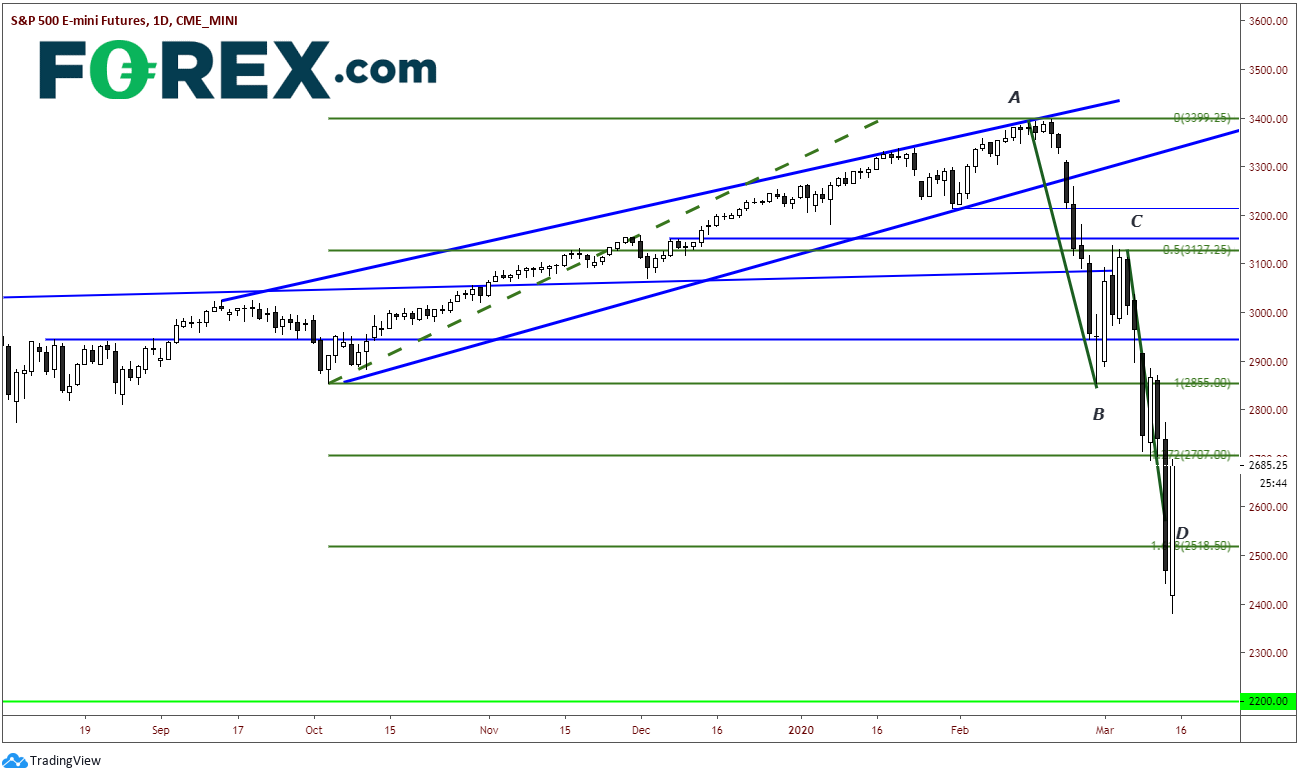 After reaching the target for the breakdown from the falling wedge on the last trading day in February near 2850, price consolidated during the first week of March. The move lower formed the first leg of the ABCD Harmonic Pattern, in which the length of AB = CD. Yesterday we completed the CD leg of the formation, while reaching the 161.8% extension of the lows from October 3rd to the highs on February 20th at 2518.50. On Friday, price traded as low as 2380 before bouncing and closing the day up 8.75%! This 2-day candlestick formation is known as a Piercing Line pattern and forms when a bearish candle is followed by a bullish one and opens with a gap down and closes above the 50% retracement of the prior candle. This is typically a reversal formation. There is horizonal resistance at prior lows from earlier in the week near 2700 and intraday lows near 2800. There is intra day support from Friday near 2580, and then near Fridays lows at 2406. Next support is the December 2018 lows near 2316. Price could continue to be volatile with large ranges over the next week.

As the volatility continues and if markets continue to be erratic, try and always remember these 3 things:

1. TRADE SMALLER SIZE TO COMPENSATE FOR THE VOLATILITY.

3. PRESERVATION OF CAPITAL IS KEY. MAKE SURE YOUR ACCOUNT IS AROUND TOMORROW TO TRADE ANOTHER DAY!

And make sure to always wash your hands!

Have a great weekend!

Debate in the time of coronavirus: An elbow bump greeting for Biden and Sanders