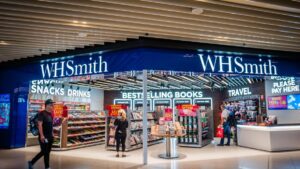 The closure of its travel shops, store writedowns and redundancy charges has left WH Smith nursing a £280 million pre-tax loss as it counts the costs of the pandemic.

The stationery retailer has swung heavily into the red, compared with a £135 million profit in 2019, on the back of a 27 per cent slide in sales to £1.02 billion. The company said that November’s second lockdown would cost the business a further £20 million.

WH Smith has written down the value of its shops by £135 million based on the loss of revenues during lockdown. On top of other impairment charges, including stock write-offs, the retailer has also incurred a £21 million charge from its decision to cut 1,500 jobs in August.

On a headline basis, which strips out the non-cash charges, WH Smith reported a £69 million loss compared to a £155 million profit in 2019.

Carl Cowling, chief executive, said: “We have a robust plan across all our businesses focusing on cost management and initiatives within our control which support us in the immediate term and position us well to emerge stronger as our markets recover.”

WH Smith, which traces its roots back to 1792, has 560 travel shops in this country and a further 247 overseas after an ambitious international expansion programme. It also has 558 high street book and stationery shops. The company employs a total of 14,000 staff.

The travel business, which before the pandemic made two thirds of its profits, has been significantly hit by restrictions on movement, which led to the closure of its outlets in airports and railway stations. The travel business swung to a £33 million trading loss compared to £117 million of profit last year and the division’s sales fell by 32 per cent to £553 million.

The company, which sealed a $400 million takeover of Marshalls, a US travel chain last year, said that it anticipated its US travel business to recover faster as approximately 85 per cent of air passengers in the US are domestic.

WH Smith, which has made a reputation of squeezing the most profits out of its shops as possible based on its analysis of “every metre drop of display space in every store” has said that it will still have to shut 25 shops this year where leases expire to cut costs on top of the eight already shut. The business has a further 420 leases due to expire over the next three years.

The group has said that it believes there are further opportunities to open more outlets in hospitals. It currently has 130, all of which have remained open this year for patients and NHS workers.