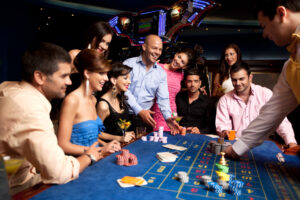 Whilst the economy of the UK is struggling to survive the effects of the health crisis, it would seem that the only advertisers out there are the gambling firms, as several brands compete for the same set of audience.

However, when you look at things properly, you will notice that most of these firms that are out there competing for players are owned by the same corporations, as there are 6 very big firms that own most of the gambling and betting brands out there.

From a user’s perspective, this is both good and bad. Big brands like this monopolising the industry can push out any other keen casinos that might have the best intentions at heart but are unable to get their foot in the door. Sites like Casimple list a few of these independently owned casino sites and compare them for you to get a better understanding of what makes a good casino.

This firm has its headquarters in the Isle of Man. It was established in 2004, and has developed into one of the biggest firms in the gambling sector of the United Kingdom. The firm owns a lot of high street sporting betting brands including Coral and Ladbrokes. They also own and operate the popular bingo brands Foxy Bingo and Gala Bingo, plus one of the oldest online casino brands out there, named the PartyPoker and PartCasino. GVC has actually written its name among the best in the industry.

The Flutter group has a very clever name and its services are all clever. The Ireland based firm is the owner of the very popular Betfair and Paddy Power sports betting platforms. Many people out there may try to see the competition between the two firms, not knowing that they are owned by one and the same company. The firm also owns the US based fantasy sports brand Fan Duel, and the well-known sports betting brand, TVG.

It was in 1997 that the web based 888 was established. This means that it has been there for 10 years before the first Apple phone arrived. 888 Online was able to turn itself into one of the most popular online betting brands through its top notch digital advertising practice. Most of the biggest brands under the 888 Holdings maintain the firm’s 888 branding, and they include the 888bingo, 888poker, 888sport and 888casino. However, 888 Holdings also owns some brands that are not too obvious and popular, including the Wink Slots and Wink Bingo.

This firm was established in Canada in 2001, and it owns and operates the popular and classy BetStars and PokerStars brands. However, in the United Kingdom, the firm is known mostly for its brand, Sky Betting and Gaming (SBG), which it acquired from the former owners in 2018. Now, it should be noted that it was the Stars Group’s agreement or contract with Sky Television that brought the SkyPoker, SkyBingo, SkyVegas and SkyBet to the limelight and made them household names in the UK betting industry.

This is based in the United Kingdom, and it stands as the oldest firm on this list. The origin of this firm could be traced back to 1937, long before the internet was ever conceived. This group undoubtedly owns and operates some of the biggest and oldest brands in the online gambling sector of the United Kingdom. The platforms include Aspers casino, Regal Wins casino, Mecca Bingo and the very popular Grosvenor casinos.

This was established in 1997 in Malta. It is among the biggest names in the industry, and owns and operates popular brands like bingo.com casino website, the Unibet sport betting platform and the 32Red online casino brand. The brands operated by this group are more popular in Scandinavia, but that does not diminish their popularity in other parts of the world.

In the 1990s and early 2000s, the online gambling industry witnessed a sort of a Wild West. But currently, that has given way for some form of consolidation and huge growth in the past few years. The growth is occasioned by some organic factors and the acquisitions that some of the firms have gotten into. Though better welcome bonuses and incentives may be doled out by the new competitors, many players prefer to go with brands that are backed by these big firms, due to the integrity, security, and reliability they think will be difficult for the newer ones to build or match.

Read more:
Who are the firms behind the most popular gambling brands in the UK?

Northern Ireland will not be ready for Jan.1 post-Brexit trade checks: watchdog

The industries that benefit from a pandemic are online